Yesterday Microsoft unveiled the Microsoft Surface, a table with a multi-touch screen. Watch the videos on Microsoft’s site, then view the Popular mechanics behind the scenes video. Very, very cool stuff. 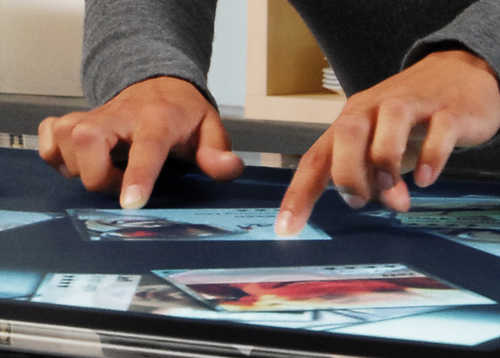 The interface is very similar to what will be in Apple’s upcoming iPhone and also the impressive work of Jeff Han of Perceptive Pixel.

Interacting with computers this way holds some very promising possibilities, many of which will lead to the disappearance of the computer as a percieved device and a strengthening of the illusion of manipulating the digitally represented objects directly (with the desktop metaphor being one of the first). As Microsoft, Apple and Jeff Han all enjoy demonstrating, looking through digital photos is an obvious example of this.

Called “ubiquitous computing”, a term coined by Mark Weiser at Xeroc PARC (who also did some of the early work on graphical user interfaces and from which Apple borrowed some ideas), it describes a future where computers seize to exist in the way we think of them today and instead merge with other objects to enhance them. Regardless of how great or not so great the new Nokia N95 phone is, the slogan “It’s what computers have become” can be seen as a play on the concept. I recommend reading Mark Weiser’s “The Computer for the 21st Century” for an interesting novel on what the future might bring.

Speed up MySQL on development boxes Sculptures in Paper